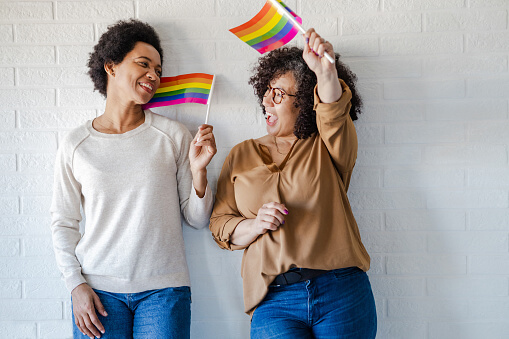 It is officially the start of Pride Month, which means celebrating the diverse sexual orientations and gender identities of people all across the country. The LGBTQ+ community is made up of people who identify as Lesbian (L), Gay (G), Bisexual (B), Trans (T), Queer (Q), or other sexual orientations and gender identities such as asexual, pansexual, transexual, and intersex.

While Pride month is a time to celebrate who you are, it’s also a time to bring to light the disparities the queer community still faces.

For example, 4.5% of the US population identifies as lesbian, gay, or bisexual. Of that, 39% reported having a mental illness (source). LGBTQ+ folks are also more at risk for physical health concerns and discrimination in the health care system.

This is a fact that will only go away with intentional awareness and change. What health concerns are queer people facing? And more importantly, what can be done about it?

Members of the LGBTQ community are more at risk for developing mental health concerns such as:

As well as other physical health concerns such as:

LGBT Youth are at higher risk for (source):

Society has come a long way in accepting non-conforming gender and sexual identities. However, it’s only been 7 years since gay marriage was legalized in the US, and we still have a way to go. In a 2013 study, 40% of LGBT adults experienced rejection from a close friend or family member after coming out to them. Rejection of sexual orientation or gender identity is known to be a risk factor for future mental health concerns, especially anxiety and mood disorders.

Studies have shown that members of the LGBTQ+ community are more at risk for violence, assault, and hate.

Studies have also shown that gay, lesbian, bisexual, and transgender teens don’t feel safe reaching out. 60% of queer youth did not report bullying incidents to the adults in their school.

Research has proven that acceptance of gender and sexual orientation identities plays a major role in mental health. However, research also points towards discrimination and societal stigma directed towards LGBT individuals that result in health disparities. (source)

Creating a safe space to talk about queer issues is vital in providing the support for good mental health. This is especially important in schools, colleges, and health care offices (mental and physical health care).

What we can do

As families and friends:

As a Queer Person:

Don’t be hesitant to reach out to crisis text and call lines if you need someone to talk to now:

RIVIA Mind also offers gender and sexual orientation affirming therapeutic space. We believe in providing the best mental health care to all people, and that means celebrating every aspect of your identity. To find a therapist that specializes in LGBTQ+ issues, click here. Or schedule a free 15-minute consultation today.